Spring Break: Over There

This article originally appeared in the Alumni News of The Citadel – Summer 2017. It is published here in its entirety with the permission of the Citadel Alumni Association. Photos have been added to this web post which did not appear in the original print version.

Cadets enrolled in Professor Kyle Sinisi’s class, History 391: The U.S. in World War I, spent their days of Spring break walking the American Expeditionary Force battlefields in France. Accompanying the class were Board of Visitors member, Col. Myron Harrington, USMC, Ret., ’61, and the director of Daniel Library, Lt. Col. David Goble, SCM, ’69. The group was also fortunate to have Matthew Davenport, critically acclaimed author of First Over There: The Attack on Cantigny, America’s First Battle of World War I, accompany them. 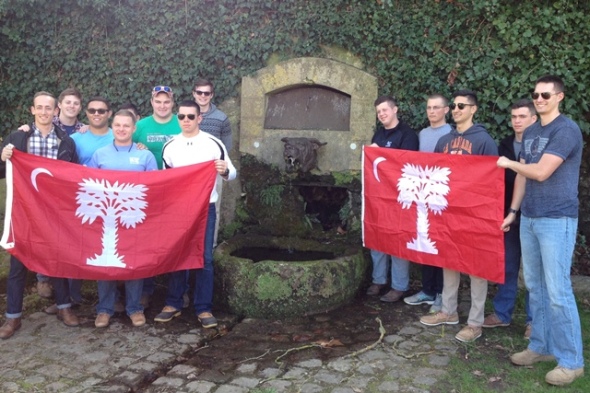 Citadel Cadets at the famous Bulldog Fountain near the village of Belleau.

In the village of Cantigny, they walked the terrain of America’s first combined arms attack as Davenport described the action where in the early morning of May 28, 1918, the 3,500 soldiers of the 1st Division climbed out of their trenches to END_OF_DOCUMENT_TOKEN_TO_BE_REPLACED

Last week, in memoriam pages were created for the three Citadel Men who died fighting in France during World War I and who now rest there…
1LT JOHN HODGES DAVID, JR., Class of 1914
LT WILLIAM MONTAGUE NICHOLLS, Class of 1912
1LT WILLIAM ALLSBROOK MULLOY, Class of 1909

With their inclusion, The Citadel Memorial Europe website contains records for all the 50 Citadel Men interred or memorialized in 15 American Cemeteries in Europe and North Africa and the one Citadel Man memorialized at a British Commonwealth Cemetery.

During World War I, 316 Citadel graduates and an undetermined number of alumni served in Europe. The entire Citadel Class’s of 1917 and 1918 eventually served in the armed forces. Nine Citadel Alumni are known to have sacrificed their lives to hostile or accidental friendly fire on the battlefield.[1] A brief history of The Citadel during WWI is available here.

Born on Christmas Day 1892, 1Lt. David, a native of Dillon, S.C., was the first South Carolina officer, and the first Citadel graduate, to be killed in action with the American forces in France on March 1, 1918. He was 25 years old and in the 18th Infantry Regiment, 1st Infantry Division. He rests in peace in St. Mihiel American Cemetery located 29 miles south of Verdun, France. The WWI cemetery has 4,153 graves of which 117 are “Unknowns”. Another 284 Americans are memorialized on Tablets of the Missing.