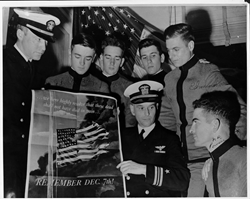 This article originally appeared in the Alumni News of The Citadel – Summer 2014. It is reprinted here in its entirety with the permission of the Citadel Alumni Association. 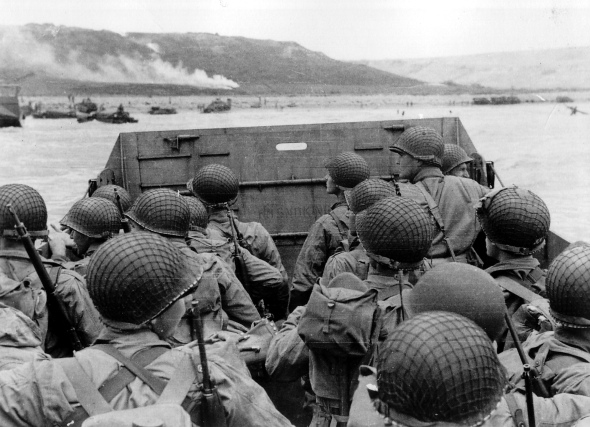 The observance of the 70th anniversary of the D Day landings in Normandy poignantly reminds us that those young men who embarked upon that great crusade and were fortunate enough to have survived are in their eighties and nineties now. Even as this article was written, The Citadel’s most decorated veteran of WWII, Colonel Theodore S. “Ted” Bell, class of ’42, recipient of the Distinguished Service Cross, the Silver Star, and two Bronze Stars, who fought with the 77th Infantry Division in the Pacific, passed away at the age of 93. We are fast approaching that point in time when memory will forever pass into history. It is incumbent upon we who are the recipients of the fruits of their sacrifice to take a few minutes to remember the exploits those who were there. 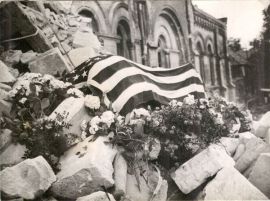 Of course, the exploits of Major Thomas D. Howie, class of 1929, “The Major of St. Lo”, commanding officer of 3/116th Infantry Regiment of the 29th Infantry Division seventy years ago are, or at least should be familiar to alumni. Howie, serving as operations officer or S3 for the 116th Infantry Regiment landed with the third wave on OMAHA Beach at H+70, June 6, 1944. Five weeks later on July 17 during the operation to liberate St. Lo and four days after taking command of 3/116, he would lose his life in that attack on Martinsville ridge; an action for which he was awarded the Silver Star. His home town of Abbeville, South Carolina, St. Lo, France, and The Citadel all have memorials to his memory, “Dead in France, Deathless in Fame” his grave in the Normandy American Cemetery is one of the most visited in the cemetery. There are other alumni who are less well known or even remembered. What follows are a few of those stories.

Major Howie was not the first Citadel alumnus to land at OMAHA Beach. That distinction goes to Private First Class Thompson Gallety Dicks, class of 1944, assigned to A Company, 1/116th Infantry Regiment landing in the first wave on the Dog Green sector at H+1. Within ten minutes of landing, the murderous grazing and plunging machinegun and mortar fire rendered the unit combat ineffective with Dicks and over two thirds of his company, many from the town of Bedford, Virginia, dead or dying on that beach forever known to history as “Bloody Omaha.” Bedford Virginia is home to the National D Day Memorial. Thompson’s father, Colonel John Leon Dicks, class of 1918, had his son’s remains permanently interred in the Normandy American Cemetery. END_OF_DOCUMENT_TOKEN_TO_BE_REPLACED

The Citadel Man Who Became A Legend

This article originally appeared in Alumni News of The Citadel – Winter 1972-1973. It is posted here in its entirety with the permission of the Citadel Alumni Association. 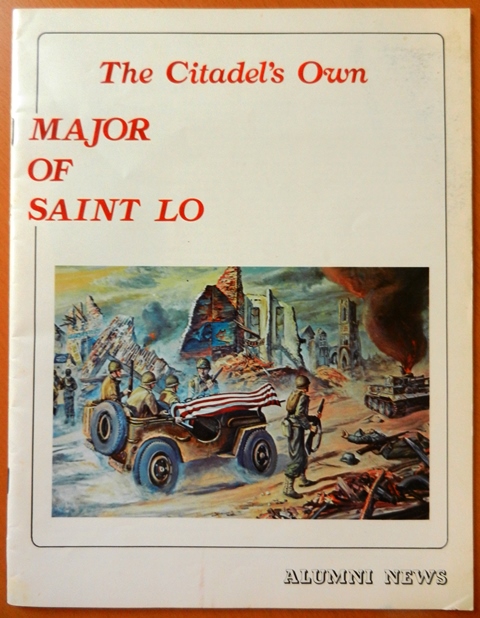 The earth shuddered as the Germans began their heavy counterattack. Maj. Thomas Dry Howie, ’29, warned his men, “Keep down!” And reassured them, “We’re getting out of here soon. We’ll get to Saint Lo yet!”

The Germans knew the value of holding Saint Lo with its vital network of roads. Only after the town was taken could American armor maneuver in the plains beyond to achieve the longed-for breakout.

Above the noise Howie explained his position over the battle phone to Maj. Gen. Charles H. Gerhardt, the commanding general.

Howie called for his map and gave orders for attack on Saint Lo – so close.

One Year of The Citadel Memorial Europe

One year ago, I published I wear the ring and publicly announced the availability of this digital memorial to the Citadel Men interred and memorialized here in 16 military cemeteries across Europe and North Africa.

It has been a year of vibrant impressions and one of the most spiritually and emotionally enriching years of my life. As I have tried to get to know these men and to share their stories, I have had the pleasure of making many new friends, and reconnecting with old friends, here in Europe and in America. So many warm and incredible people have touched my life this year. For this, I am truly grateful.

I have compiled my Top Ten Memories. Here is our story as I experienced it the past 12 months… 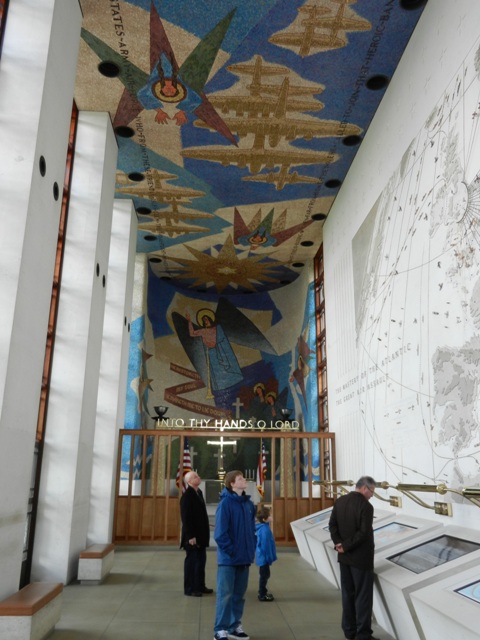 A few days after “going public”, I received an email from an alumnus. A few weeks later, I flew over the North Sea to visit Cambridge American Cemetery in England with him, two of his sons, and the historian of “The Bloody 100th”. It was an inspirational and moving experience that I shall never forget. Together, we paid our respects to the three Citadel Men resting in peace and the one memorialized on the Wall of the Missing. Together, we recited The Cadet Prayer.

On that day, I began a new phase in this journey. See my post The Major of St. Lo.

During Memorial Day weekend, I visited the Citadel Men resting in peace at the Netherlands and Henri-Chapelle American Cemeteries. The two cemeteries are located just 20 kilometers from each other, one on either side of the Dutch-Belgian border to the east of Maastricht and Liege in the direction of Aachen, Germany.

An alumnus wrote to me several times during April and May, “Don’t forget those who are still Missing-In-Action!”. In remembrance of the eight men who rest in no known grave here in Europe and North Africa, I laid flowers at the grave of an unknown a few meters from Albert S. Hagood, Class of 1931. They are not forgotten.

Two posts – Part I and Part II – describe the events of that spectacular Memorial Day weekend.

Since last April, I have received details about our men from many places – alumni, family, their “adopters”, historians, and archivists. Four men have received the attention of several posts. Their names, faces, and stories have become familiar. END_OF_DOCUMENT_TOKEN_TO_BE_REPLACED

They passed out Presidential citations today to officers and doughboys who cracked St. Lo, the eastern hinge of the German battle-line, and it was a sad ceremony to many because the “Major of St. Lo” was not alive to receive his.

The “Major of St. Lo” was Thomas D. Howie of Stauton, Va., one of the best beloved battalion leaders in the American army. He was killed July 17, the day before the city fell, after he broke through the Nazi wall to relieve another battalion of this regiment which was encircled on the outskirts. 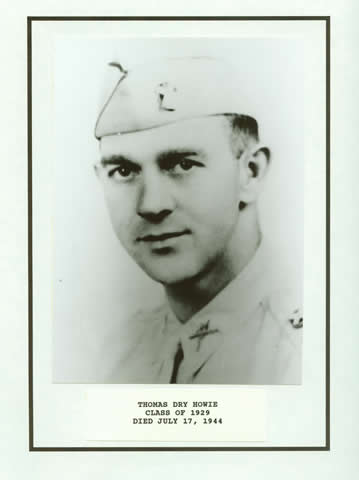 Today the major lies in honor with other officers and men in the 29th division’s cemetery [1] – but on the day St. Lo was taken the dead major was carried through the streets in state in an ambulance and his flag-draped body was placed on a pile of rubble beside the shell-wrecked church of Ste Croix. The storming force passed in review through an artillery barrage thrown by the withdrawing Germans.

Howie was bald and in his middle thirties. He formerly taught English literature and coached boxing and football at Staunton Military academy. He was an athletic star himself earlier at The Citadel Military College, Charleston, S.C.

END_OF_DOCUMENT_TOKEN_TO_BE_REPLACED

The Major of St. Lô

“The development of character is at the heart of our development, not just as leaders, but as human beings.” [1] 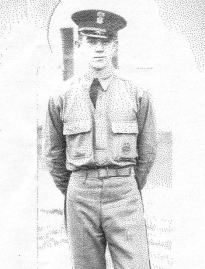 Last Tuesday, I met Bill DeMarco ’88 at Cambridge American Cemetery where together we paid our respects to four Citadel Men. Walking amongst the white marble grave markers and talking about our Citadel experiences helped me to put my finger on how best to describe Major Thomas Dry Howie, USA, Class of 1929 – he was the quintessential “Whole Man”. Those who have walked the gutter of the Avenue of Remembrance on The Citadel campus know well the tower and carillon which bear his name as well as the mural inside Daniel Library depicting the entry of his flag draped body into the French town of St. Lô. Knowing these is basic “knob knowledge”; however, knowing the man himself is not, and, that is a pity, because he took the “Whole Person” concept to heart and exemplified it. I must admit that I had not reflected much on the concept since graduation, but an article about “The Major of St. Lô” and the visit to Cambridge with Bill brought it back to me.